Simple Training on the Range

Simple Training on the Range

Anyone who has spent even a modest amount of time in the modern firearms community will be familiar with “Pew-Pew Therapy.” For some, a trip to the firing range to throw lead down range is equal to hitting the heavy bag at the gym after a hard day at work. With low ammunition supplies, and prices at an all-time high, this form of therapy has become more expensive than an hour with an actual psychoanalyst. Trips to the range nowadays need to count, but do you take the time to make them count?

What’s the difference between a trip to the range for some gun time, and taking some time out to train? Simple: a plan. Do you have a plan when you visit the range? Do you have training goals? Do you spend time to develop specific skills or work on bettering your technique? Do you even know how?

Many people go to the range and work on the basics over and over again. This is fantastic, but what about those pesky bad habits you have? Do you take the time to root them out or do you just reinforce them by letting them go unchanged in your technique? Here are a few simple drills to help identify and correct deficiencies in your skillset.

Begin your shooting drill as you normally would. Eventually, you will end up with a click instead of a bang. When you do, did you flinch? Many people who have never trained for it don’t realize how much they anticipate recoil until the recoil doesn’t come. That is when they see that they jerk the weapon violently in anticipation. Recoil should surprise you; not make you jerk the weapon.

The second part of the training is what happens after the gun does not fire. The first time you see yourself flinch, you may laugh or get roasted by your range buddy but stay in the fight! You just had a malfunction. Clear the weapon! Tap, rack, and get it back in battery so you can put more rounds down range. This drill intends to help you identify any recoil anticipation and prepares you for the possibility of a malfunction in a gunfight, keeping you in the fight and out of a pine box.

This drill doesn’t refer to your weapon failing to function but to your rounds failing to stop the threat. Our perception of how people react to being shot has been drastically altered by television, film, and pop culture to think that people fly backward and don’t get up from a single round to center mass. Real-life doesn’t work that way. Often those intent on inflicting harm can fight through multiple gunshot wounds, and despite mortal wounds, are still able to return fire or inflict wounds themselves. This drill is designed to prepare you for that possibility. 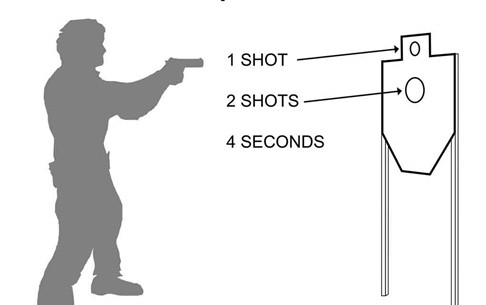 Often referred to as the “Mozambique Drill,” this drill is simple and requires nothing but a silhouette target at about 7-10 yards. Once in position, on the command of threat (or the sound of your shot timer if you have one), you will fire two rounds in the torso and one in the head. Train yourself to decide when the target is “down” and keep your weapon pointed at the target until you have made that determination. As you become more proficient, place an index card where the heart would be and a playing card where the ocular cavities are. Try to place your shots in those areas for greater accuracy.

Many firearms enthusiasts stand up on the range and fire at their static target, reload, fire another magazine, score their target, wash, rinse, and repeat. These drills will ensure that your first time shooting on the move, or from cover, isn’t during a fight for your life. Make sure you are on a safe range. If you have a range buddy with you, have them act as your spotter and beware of others around you. Crowded public ranges may not be the place for a drill like this.

Start by identifying an object to use as cover on your left or right. You can use lumber from a hardware store to make your own using these instructions. Set up your barricade on the side you will be training on, between 10 and 15 feet away. Begin at your original starting position with your firearm in the holster. On the threat command, draw, and begin moving slowly to cover while placing effective rounds downrange. Once you have gotten to cover, crouch down and take full cover.

Once you are behind cover, lean out, and practice delivering rounds from behind the barricade in short, two or three round bursts accurately. Speed is not the purpose of this drill; learning to effectively shoot and move to cover is. As you gain proficiency, the speed will come. Remember the wise words of many tactical operators over many years of experience: “Slow is smooth, and smooth is fast.”

These three drills aren’t definitive by any means and are not the only way to train. They are just three simple drills designed to help you start thinking about making the most of your range time and maximizing your skillset with your most expensive asset: ammunition. If you are ready for more drills, or just want to see more ideas about the kind of drills that are out there, take a look at this list of drills for the range. Just remember, these drills should always be done safely. Don’t try to be John Wick in one day on the range. Walk before you run and develop good habits. Starting with good habits may be hard, but correcting bad habits is harder.

Source
Simple Training on the Range is written by for aliengearholsters.com

Not Your Grandaddy’s Puppy | The Weapon Blog

The Ruger 10/22 Rifle: A Brief History Of A Classic Gun

No Result
View All Result